A Guide to the Wines fo the Legendary Bordeaux Region 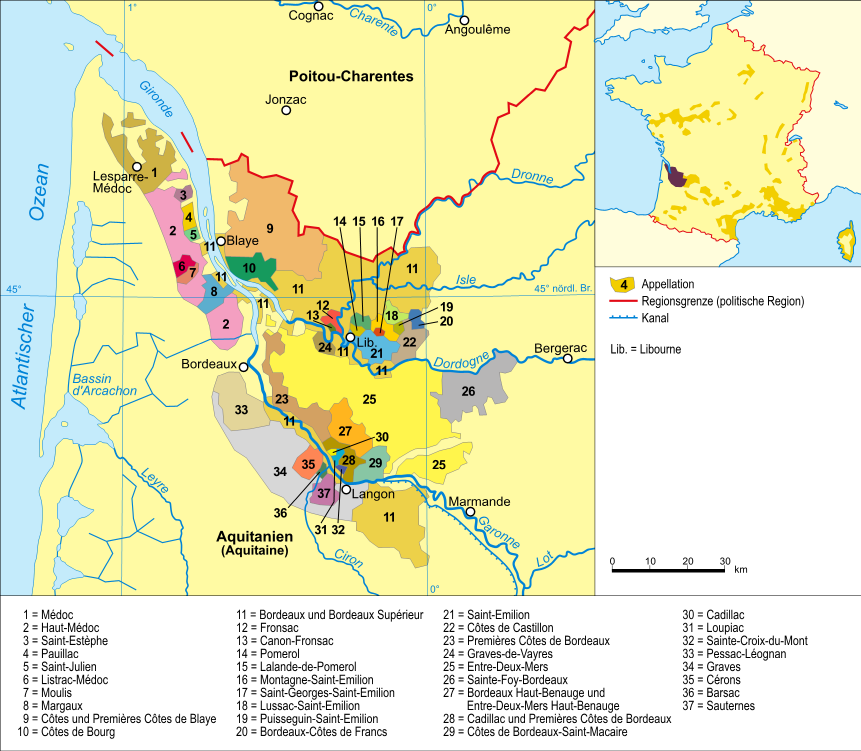 Appellations, Banks, Gravel, and Clay all work together in the Southwestern region of France which has become legendary for its wine production:  Bordeaux

The following is a synopsis of the Bordeaux region and the sub regions which are responsible for producing much of what the world today considers a fine wine.  The following will both demystify the wines of this region and whet one’s appetite for a taste test of their own!

THE BORDEAUX EFFECT AND THE VINTAGES SHE PRODUCES

Red Bordeaux (or “Claret” as the British have always known it) can be the epitome of fine wine. The best wines exhibit a wonderful complexity of aromas and flavours, great elegance and refinement and an ability to age gracefully – some for a hundred years.

Like all of France, quality wine production in Bordeaux is governed by a set of regulations known as “Appellation Contrôlée”, often abbreviated to “AC”. An AC covers a certain geographical district and governs production of wine within the district. The whole of the Bordeaux region is covered by a couple of catch-all, generic ACs: AC Bordeaux and AC Bordeaux Supérieur (the latter is higher in alcohol, but not necessarily better). An enormous quantity of inexpensive, “everyday” wine is made under these ACs. Though this is not the “great” Claret that all the fuss is about, it can provide very attractive, reliable drinking.

There are also many smaller, named areas, each entitled to its own AC: AC Fronsac, or AC Pomerol for example. These more specific ACs are usually superior to generic Bordeaux and have stricter regulations.

To the west of the river Gironde, the vineyards of the Médoc and Graves are based on gravelly soil and are planted mainly with Cabernet Sauvignon vines. To the east lie Pomerol and St-Emilion, two smaller areas of predominantly clay soil, planted with a higher proportion of Merlot. Hence we have “left bank” and “right bank” wines.

The wines from each area can have quite a different character because of the different soils and predominant grape variety. This also means that one is usually more successful than the other in any given year.

Bordeaux Grapes no matter where they are from, almost all red Bordeaux is blended wine: made from two or more grapes. Red wine grape varieties allowed in Bordeaux, in order of importance, are: The Médoc is home to most of the great, classic Clarets. You will find wines labelled AC Médoc that are usually one step above basic Bordeaux, but the very best wines of the Médoc come from even more tightly defined ACs within the Médoc. The best of these individual ACs include:

This region is dominated by large wine-making estates, known as châteaux. Whilst many of these do indeed have a château as their HQ, others have nothing more than the vineyards and a collection of ordinary working buildings. Unlike many producers from other parts of the world, each château tends to produce only one “grand vin” which carries its name. Some of them also make a white wine, and many make a second wine, from vats not considered good enough for the “grand vin”.

Each of the top ACs of the Médoc has its own character:

In 1855 Médoc wines were classified. From the many thousands of wines produced in the area, just sixty were thought worthy of classification. These sixty were sorted into five ranks or, in French, “Crus” (meaning “growths”), i.e. “Premier Cru” (first growth), “Deuxième Cru” (second growth) and so on.

There are only five top ranking, Premier Cru wines:

All classed growth wines command very high prices, many of these, particularly the Premiers Crus, are bought by investors all across the world. To this day the classification remains more-or-less unchanged and many of the original classified châteaux are still producing some of the world’s greatest wines. Of course strong arguments could be made for promotions and relegations within the classification. A group of wines known as the “super seconds” are generally acknowledged to be Premiers Crus in all but name, and a few of the original châteaux have either gone or have lost their reputation. However, apart from some obvious anomalies, it is remarkable how the bulk of the classification holds up, even after 150 years.

Just below these classed growth superstars of Bordeaux are a host of wines known as the “Crus Bourgeois”. Many fine wines can be found within this classification – some are worthy of classed growth status, yet are available at a fraction of the price. I have found properties such as Chasse-Spleen, Meyney, Coufran and d’Angludet to be consistently good. However, in 2006 a court case found that the classification of the Crus Bourgeois was illegal, and pending a restructuring which means wines will have to be independently assessed for inclusion each vintage, the whole classification was temporarily suspended.

Graves lies to the south of the city of Bordeaux. This region produces both red and dry white wines on the very gravelly soils after which the region is named. The red wines tend to express a soft, earthy quality. Like the Médoc this region was also classified, but not until 1959. Only a couple of dozen châteaux are entitled to the words “Grand Cru” on their label. The best vineyard sites of the Graves are clustered in the North of the region. That is where almost all the Grands Crus are situated. In 1987, this area was given a brand new AC of its very own: Pessac-Léognan. Wines bearing these words on their label should be of higher quality than most Graves. The undoubted super-star of the area is Château Haut-Brion. As noted earlier, this property was actually declared a Premier Cru in the 1855 classification of the Médoc due to its exceptional quality. Uniquely, it is allowed to have both classifications on its label: Médoc Premier Cru and Graves Grand Cru. Its sister property, La Mission Haut-Brion, is also capable of the highest quality.

Although the area is quite large, the properties here tend to be much smaller and less grand, and the wines (exclusively red) are very different. The soil is clay and limestone rather than gravel, and the dominant grape variety is not Cabernet Sauvignon, but the softer Merlot and Cabernet Franc. The wines tend to be approachable at a younger age and to have a warm-blooded fruitiness. It is an area that requires a little bit of caution because of its classification system. St-Emilion wines are divided into 5 classifications. In ascending order, these are:

Pomerol is by far the smallest of the great regions. It has 2 basic constituents that determine the character of its wines: the soil is thick, heavy clay and one grape variety dominates: Merlot. Pomerol wines are extremely soft, seductive and full of spice and vivid fruit. The production tends to be tiny in the area, so the wines are generally expensive. Indeed, Pomerol is home to some of the world’s most expensive wines such as Châteaux Pétrus and Le Pin, the latter producing little more than 500 cases each year. You will rarely see these wines in shops as they are snapped up years in advance of production. Look for more reasonably priced wines such as Petit-Village, Le Bon Pasteur and Clos René. The wines of Pomerol have never been classified.

The Bordeaux area also produces world class white wines, though invariably in tiny quantities. The most famous of these are the sweet wines of Sauternes and Barsac, including the almost legendary Château d’Yquem. These luscious wines (also classified in 1855) are created by a particular and unpredictable fungus, called botrytis. Botrytis rots the grapes, leaving them high in sugar and glycerine which leads to their eventual silky, honeyed sweetness. The best dry white wines come from the Graves area. Though often of tremendous quality, these tend to be scarce and the famous names are very expensive.

From the inexpensive, soft, fruity and delicious wines of the Premières Côtes de Blaye in the north of the Bordeaux region, to the moderately-priced structured, tannic and impressive clarets of Fronsac or Lalande de Pomerol, the “lesser” red wines of Bordeaux are not to be despised. Whilst the finesse and breeding of the top classed growths might be missing, the red wines of the region are generally very reliable and well made.

The dry whites of the region, from areas like Entre-Deux-Mers or simple AC Bordeaux can produce refreshing, zippy, occasionally slightly tart wines for drinking young. Areas around Sauternes, like Sainte-Croix-du-Mont or Loupiac which lie just across the Gironde, also produce sweet, sometimes botrytis affected wines that can be very good and are moderately priced. Rosé is also produced in the Bordeaux region, often from the Cabernet Sauvignon. It can be delicious stuff with bright, supple fruit and refreshing acidity.

Indeed, the Bordeaux Region and its Appellations are the epicenter of the production of Fine Wines today as they have been for over 150 years.  A basic understanding of the region and the wines that are produced there, which we hope you have gained by reading the above information, is absolutely crucial for anyone who wishes to dabble in fine wine for investment purposes or blow a large chunk of change on an excellent bottle of wine, which is a sort of investment in its own right.

If you would like more information on fine wine investments, simply email us at: halfwayfoods@gmail.com with the word “VINO” in the subject line.

More to come on the Fine Wine Market.  Until then, Bon Appetit!