Eggplant is nutritious and oh-so-versatile! Here are 10 flavorful vegan recipes that show off the many ways that you can prepare eggplant at home.

August and September are my favorite time of year for produce. Deep purple, shiny eggplant has a lot to do with this.

I know that eggplant can be controversial. Along with beets and mushrooms, it’s one of the foods that my nutrition clients most often report being squeamish about.

Me? I’m a devoted eggplant fan. Eggplant is hearty, it soaks up flavor efficiently, and it is amazingly versatile. It can be baked, fried, stuffed, sautéed, or even turned into vegan “bacon,” as you’ll see in the vegan eggplant recipes that follow.

Eggplant is also a good source of nutrition.

The health benefits of eggplant

Eggplant is rich in health-supportive phytonutrients. Eggplant owes the beautiful purple color of its skin to anthocyanins. These are plant pigments that are associated with possible protection against cardiovascular disease and some cancers. Anthocyanins may help to enhance memory and boost cognitive function, and they’re also associated with anti-inflammatory action.

Eggplant is also a source of lutein, a carotenoid that may be beneficial for eye health.

Finally, eggplant is a high fiber food. This means that it can help to keep us full, to keep blood lipids in check, and to benefit digestive health.

I love slicing Japanese and Chinese eggplants, which are long and thin, into circles, then adding the slices to stir fries. It’s also fun to add lengthwise slices of these varieties to the grill.

Finally, Indian eggplants, which are short and round, are my perfect for stuffing.

You can learn more about types of eggplant in this handy primer.

How to cook eggplant

Eggplant can be grilled, pan-fried or sautéed, baked, stewed, or grilled. Eggplant flesh is sponge-like, and it absorbs flavor easily, so I think it’s a great choice for marinades.

Before cooking a globe or Italian eggplant, you’ll want to trim off the top. It’s not usually necessary to remove eggplant skin, though if a recipe calls for doing that, then there’s probably a good reason.

To salt or not to salt eggplant?

Whether or not to salt eggplant flesh prior to cooking is a topic of debate! Salting is thought to reduce any potential bitterness in eggplant.

Some say that ripe eggplant isn’t bitter and needs no salting. Others feel that salting doesn’t make a difference one way or the other.

Me? I’m pro-salting. I do think it helps to reduce bitterness, and more importantly, I think that it helps to tenderize the eggplant flesh. I almost always salt eggplant before cooking with it, unless I’m making baba ganoush.

Many of these vegan eggplant recipes call for a salting step. Plan accordingly!

Here are ten of my favorite vegan eggplant recipes, which I hope show off the summery goodness and versatility of this nightshade.

A perfect dish to make with your late summer eggplant, your favorite pasta shape, and a jar of your favorite marinara sauce. Simple, vegan comfort food at its best. 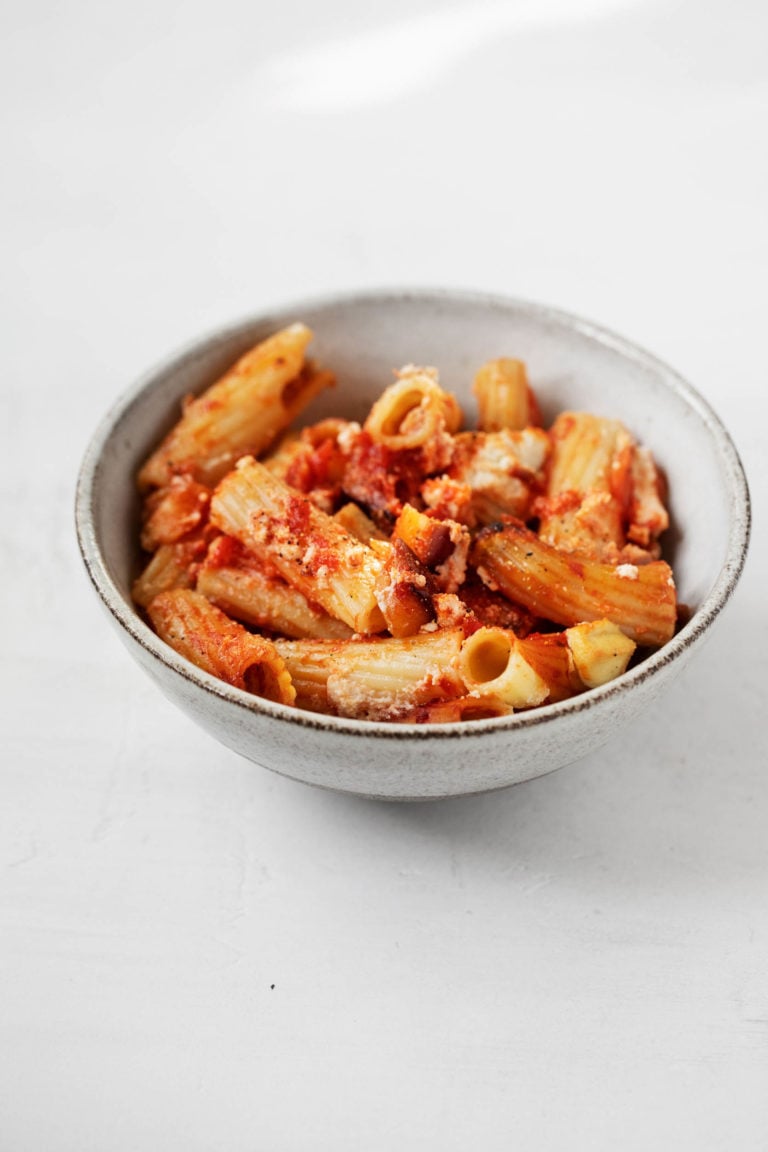 This vegan eggplant tortilla pizza is perfect for a nutritious plant-based lunch! It’s made with a creamy eggplant spread that’s reminiscent of baba ganoush, peppery arugula, and fresh or roasted red pepper strips. 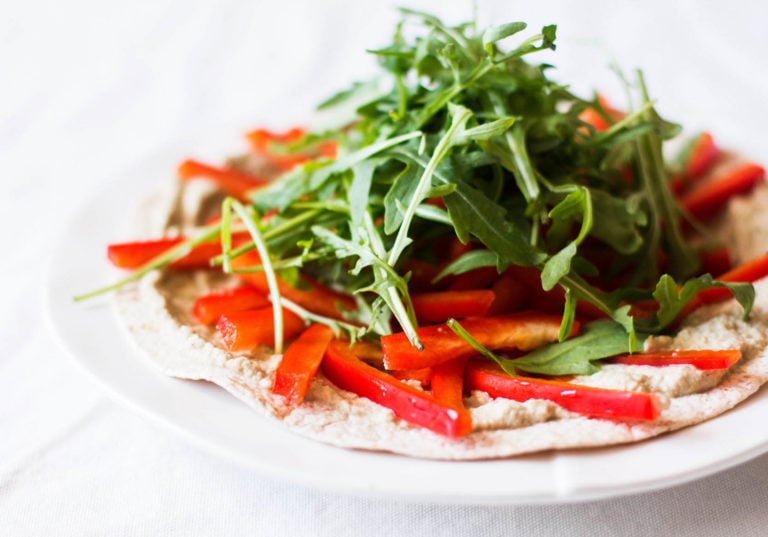 A savory, Mediterranean inspired eggplant, tomato, and lentil dish to celebrate the flavors and fresh produce of summer. 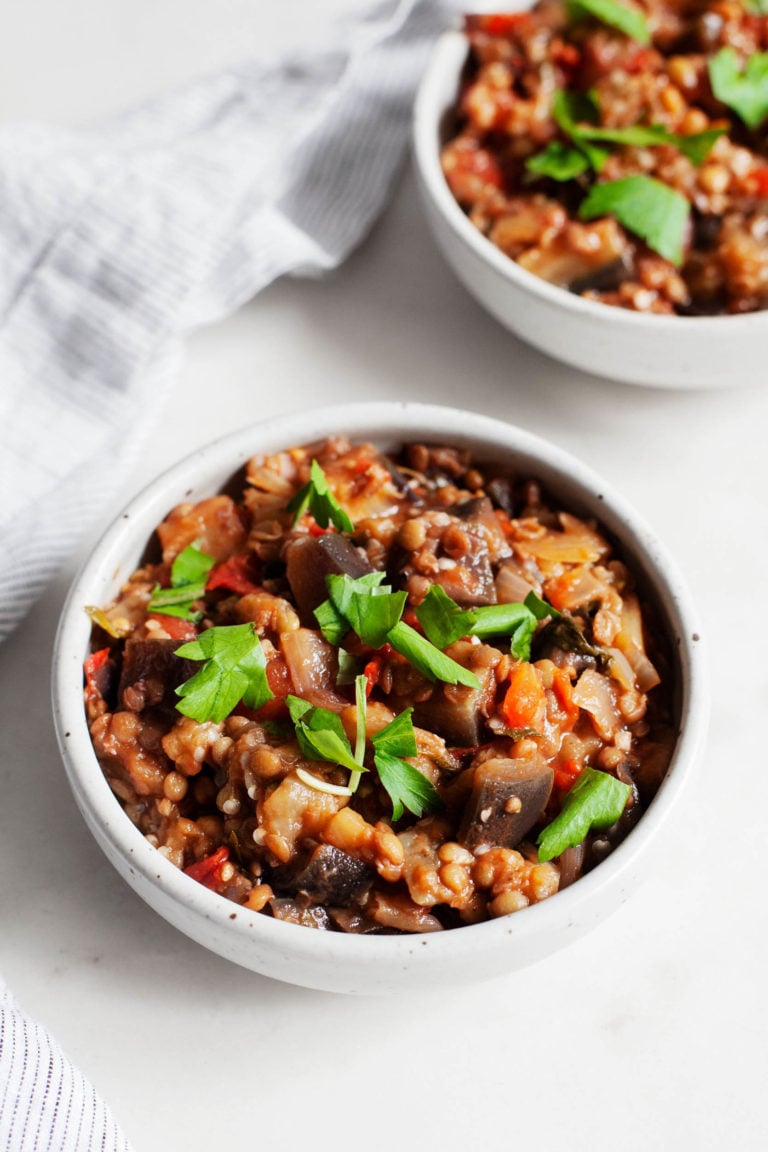 This vegan Pasta alla Norma is so saucy and satisfying! Made with eggplant, basil, capers, and cashew cheese, it’s a plant-based spin on the classic Sicilian recipe. 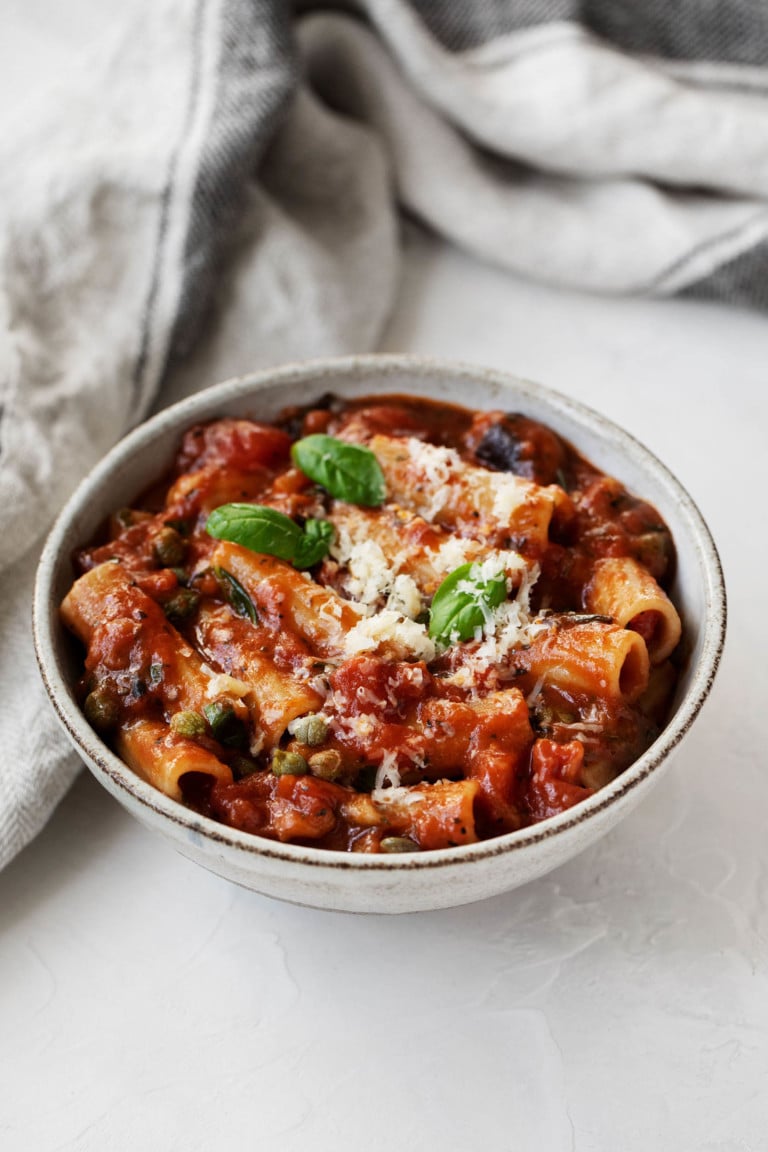 These vegan eggplant rollatini are a lighter spin on lasagna rolls, but they don’t sacrifice any flavor! They’re filled with a protein rich tofu ricotta and wrapped in layers of baked eggplant. A perfect plant-based dish for summer entertaining. 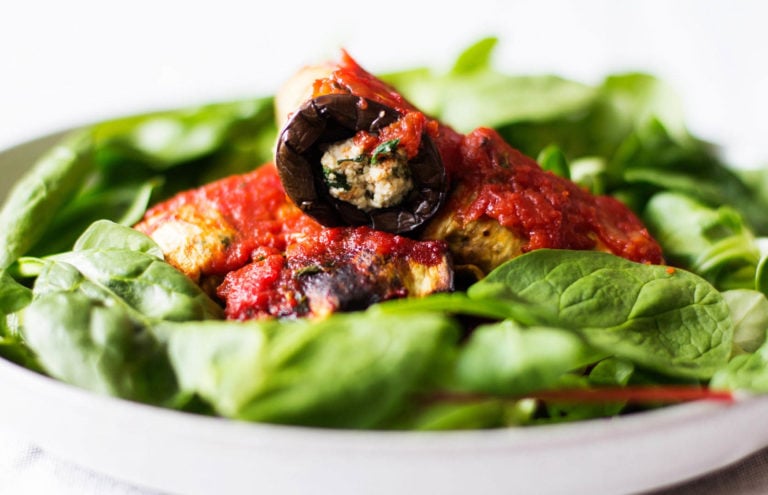 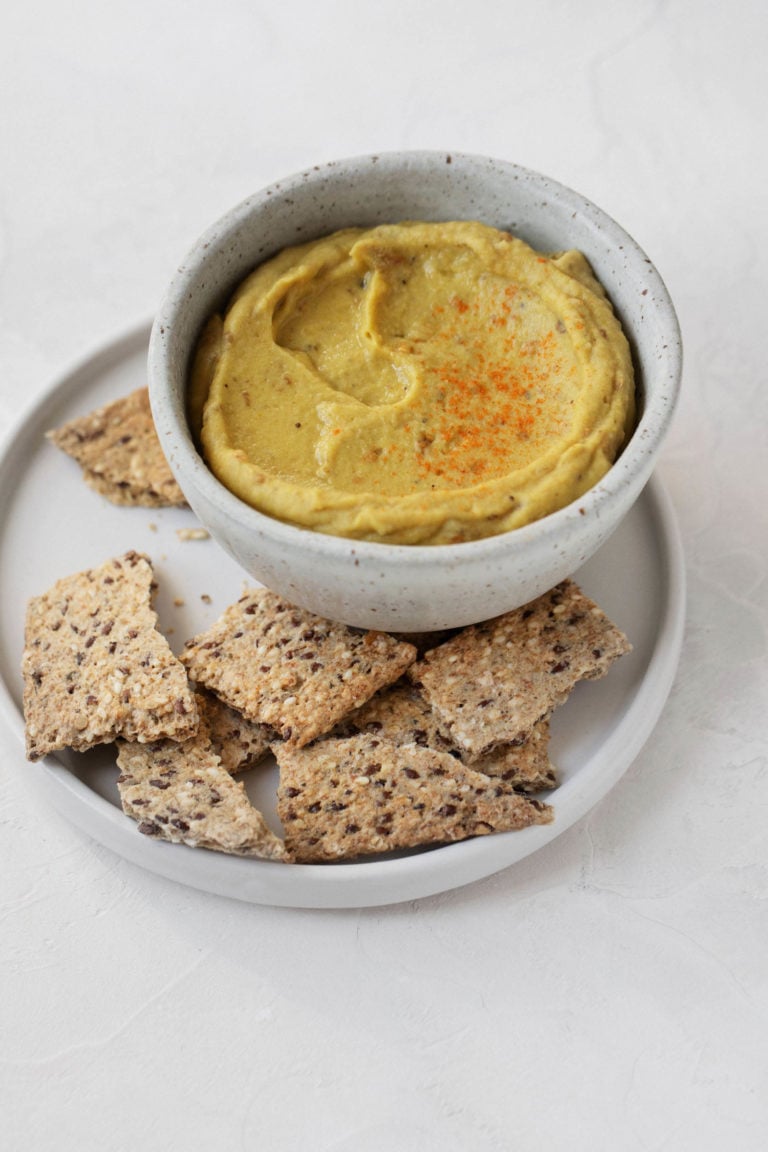 Curried eggplant, tomatoes and chickpeas make for a satisfying and flavorful summer meal. Served with a quick, homemade flatbread! 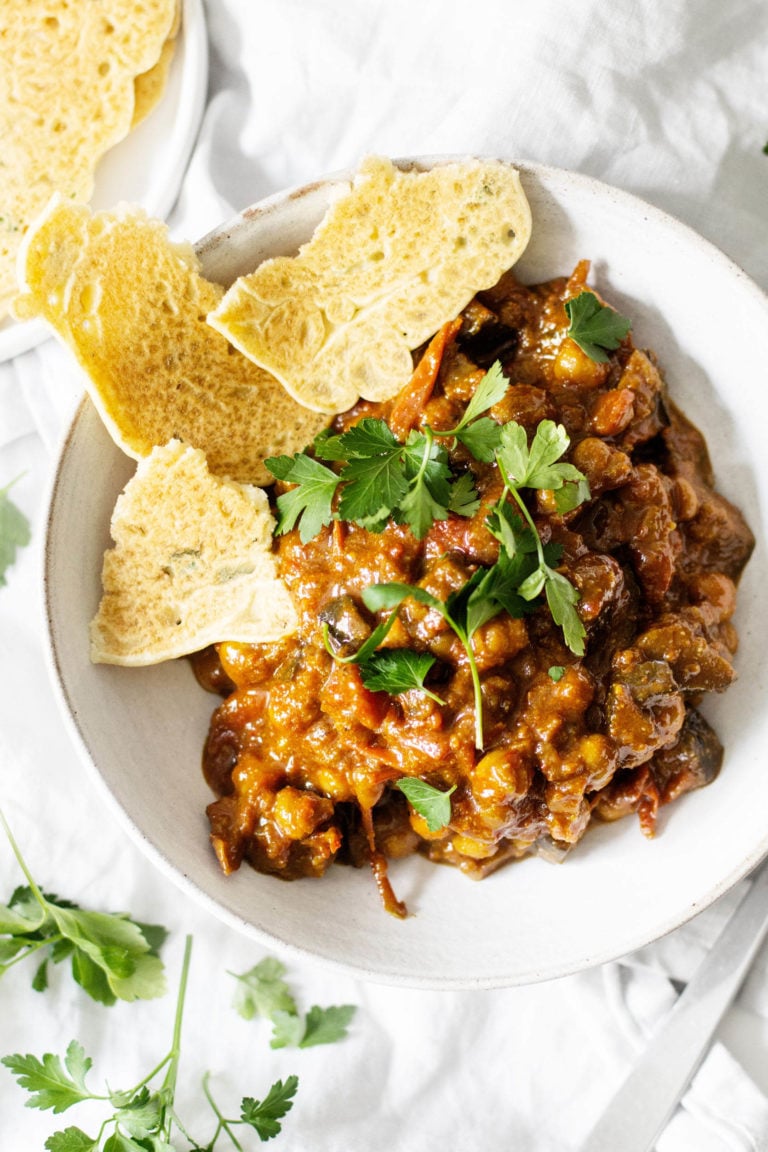 These bulgur stuffed eggplants with tamarind, currants & pine nuts are bursting with flavor and packed with nutrition. They’re especially good for entertaining and serving to friends! 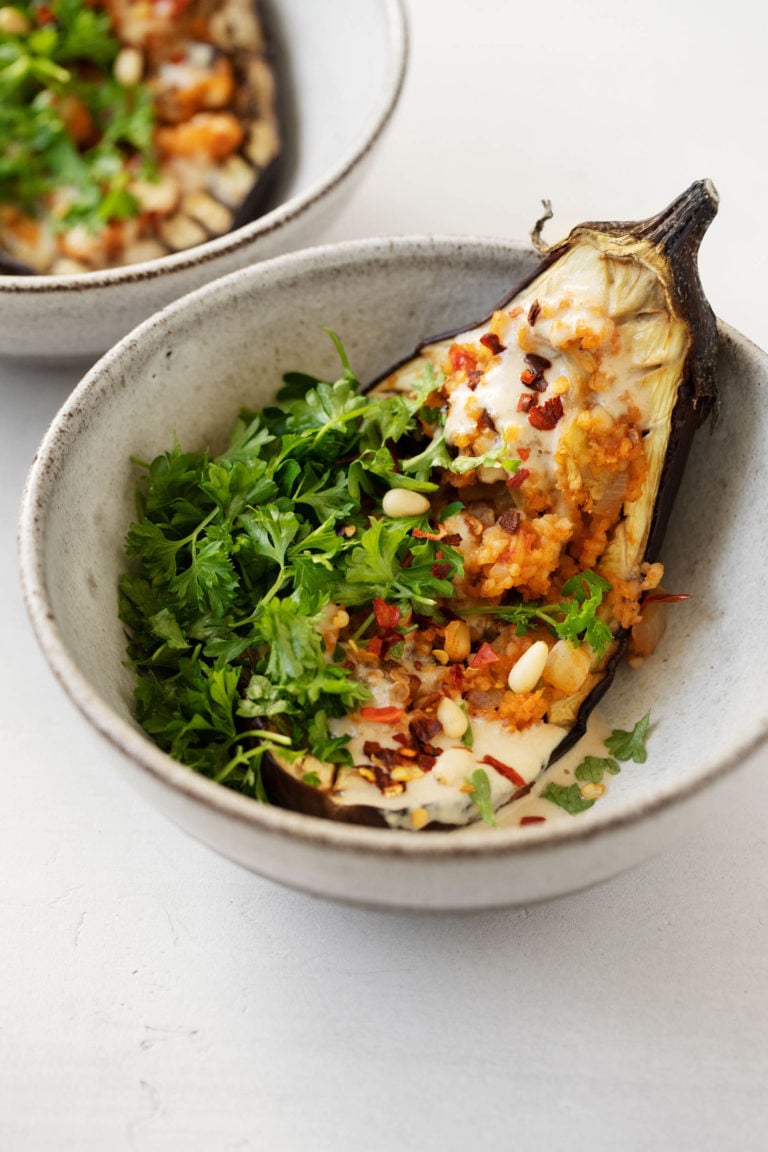 This eggplant quinoa dish is a full of healthy, Mediterranean inspired ingredients! It’s made with tender, roasted eggplant, white beans, and peppers, and it’s dressed in a sweet and tangy balsamic vinaigrette. 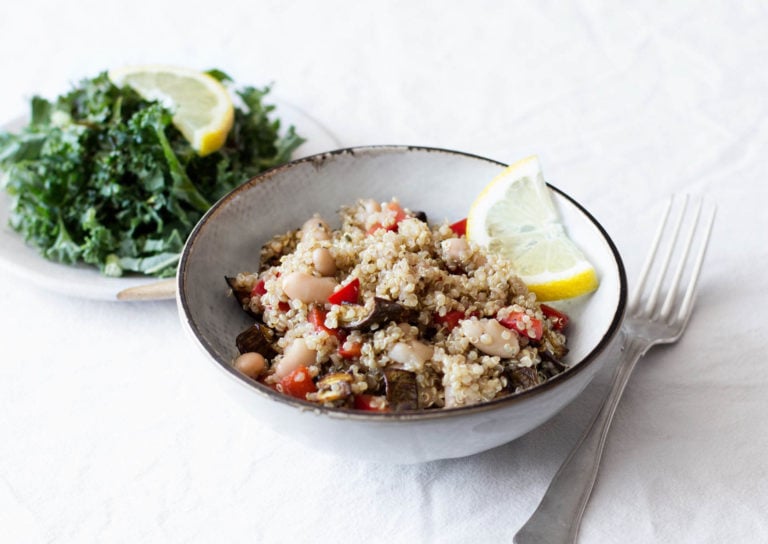 Vegan eggplant bacon will add a burst of smoky, salty flavor to sandwiches, burgers, and more! It’s a healthful, plant-based alternative to meat. Best of all, it’s easy to prepare. 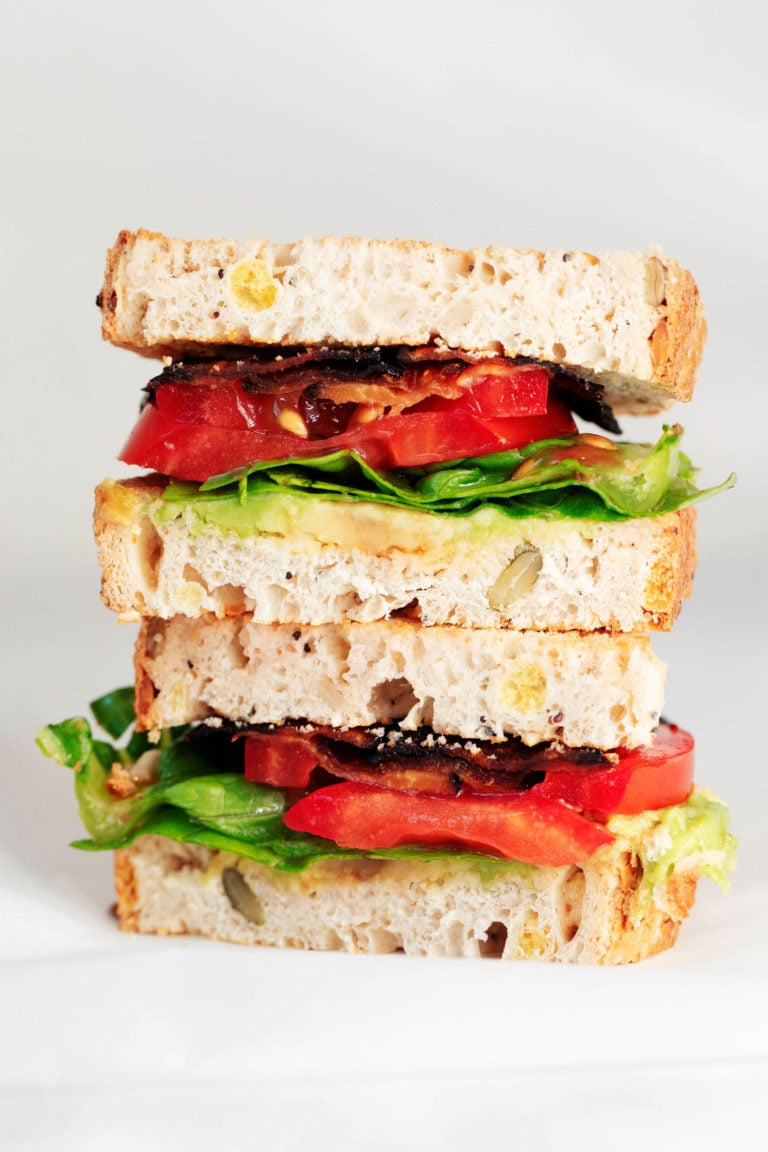 Eggplant bacon! Who knew, right? This is an old recipe of mine, which I originally prepared raw, in a dehydrator. Now I make it in the oven, and I prefer the baked version. I think it has a better texture and a deeper, more complex flavor.

You can learn more about making vegan eggplant bacon in this post! In the meantime, here’s my go-to recipe. 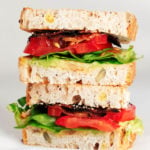 Speaking of this, a BLT for lunch is sounding really great right about now.

I hope you’ll enjoy the eggplant recipes—and all of the joys of late summer at the farmers market!